The Faces of Courage 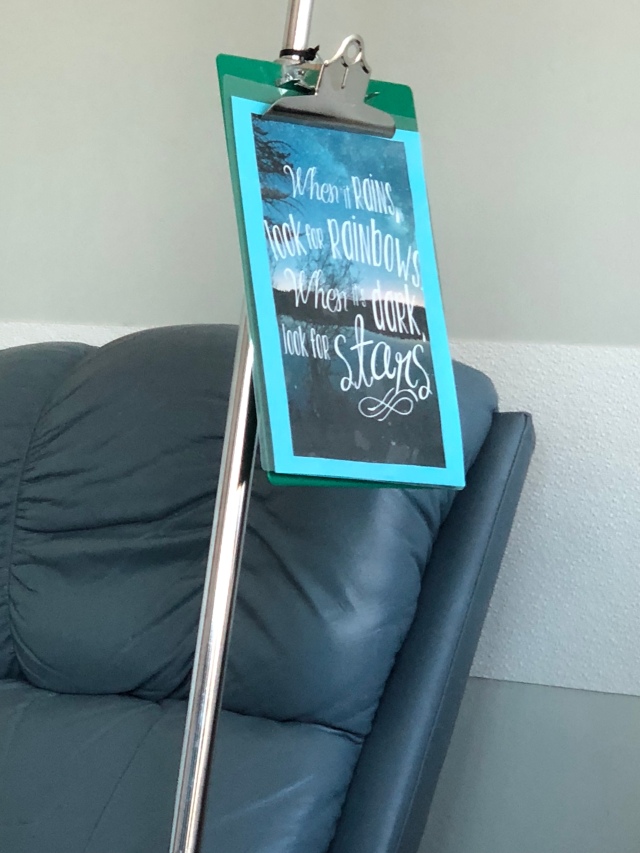 Yesterday, I went with my dad for his first chemo appointment. It was an experience to say the least in so many ways. As we sat in a room with so many people getting IV infusions, my mind began to wonder and I of course began to think.

As I looked around the room at all the empty chairs that I knew would soon be filled, I began to think of the lives that would occupy each one of them. One by one people came in and after a while it became a sea of silver poles with their IV bags attached. My dad and I were in one of the adjacent rooms that had about eight chairs in it and soon the chairs across from us were also filled with people coming in for their treatment.

The amazing thing was that it was almost as if we were among family. They could tell this was our first time and they offered words of encouragement and advice as they saw us maneuvering through the procedure. They were eager to help us through what they had told us they had been through many times. There was the man that was there for his last treatment. The woman that comes several times a week and the woman that could barely speak but was able to put on the most beautiful smile.

Unfortunately, about 10 minutes into my dad’s administration of the medication he had a severe reaction to the medicine and the room quickly filled with doctors and nurses. The individuals sitting across from my dad knew I was scared and took me under their wing to guide me through what was happening as if I was their own son. Having me get one of the knitted caps that was donated to keep his head warm. Telling me to cover his feet to help him stop shaking. Any piece of advice they could give, all while continuing their own treatment and seeing us through the event.

My dad wound up going to the emergency room, but is now home and resting as we move to plan B. However, as horrible as that experience was, I got to see the true face of humanity yesterday. People in the middle of their own major ordeals, bearing faces of courage, leaping into action to help their fellow human beings because it was the right thing to do. I don’t even know their names but they will always have a place etched in my heart.

Those who have experienced chemo know first hand the feelings that those drug administration rooms bring. I wasn’t even getting the chemo and I know what I felt. I cant imagine the angst it causes to those who have to go through the treatment itself. I saw it on my dad’s face however and I felt his palpable uneasiness. However, yesterday I also saw the faces of courage on some pretty amazing people and for that I was truly humbled.

The picture of the sign that was on one of the IV poles pretty much summed up what I felt from each of my unnamed heroes yesterday, “When it rains, look for rainbows. When it is dark, look for Stars.” Thank you my faces of courage, you will never know the lasting impression you left on me.